A Furniture Sensation in Bantry Bay

A contemporary development in Bantry Bay - The Aurum Presidential Suites - saw Craft Furniture partner with Weylandtsudio to bring the penthouse apartment to life!

As its name signifies, Bantry Bay lies perched on the rocks overlooking the Atlantic Ocean in one of the most exclusive Bays on the Atlantic Seaboard. Crashing waves, magnificent sunsets and protection from the wind make Bantry Bay much sought after and, because of its position, an ideal base from which to explore Cape Town!

Craft Furniture recently completed a collaboration with Weylandstudio for a beautiful home in The Aurum Presidential Suites. The project entailed the creation of beautifully bespoke furniture pieces for the interior design of a penthouse apartment in The Aurum Presidential Suites. The apartment is made up of four bedrooms and a study that maximises the stunning views that Bantry Bay has to offer. The design vision from Weylandts was incredibly forward-thinking taking conventional designs to the next level through creative forms that play on traditional shapes and functions.

Eloise Thompson from Weylandtstudio came to Craft Furniture with a vision for the home’s interior space and asked us to create the construction drawings for each piece. We completed stone plinths, dining and side tables, coffee tables, a desk in the study, dressing tables and bespoke mirrors.

The dining room table has an unconventional shape that allows utilising smaller space more effectively while elongating the room. The table itself was constructed with two steel base units that were filled with sand to keep the table sturdy. We then CNC-cut a timber substructure that fit into the marble top. This allowed the marble to be cantilevered while still being a functional dining table.

Craft Furniture completed two additional side tables that mirror the dining table design. These tables, which are situated in the hallways of the home, have been made with the same steel base but instead of marble, they feature a prime oak cantilevered top that has been stained to black.

The stone plinths act as an elegant decorative display to corners of the home which elevates the interior design to be a celebration of sculpture and art. We created these plinths by first building a timber substructure that we could easily clad the stone to. The stone that we used came in a  variety of honed and polished finishes which adds to the visual intrigue when they are grouped together.

Craft Furniture continued with the combination of stone and timber in the study seating area with these unique nesting coffee tables. The set is made up of two tables that have been shaped specifically to be able to fit into each other. The one features a glass top that allows the client to observe the beauty of the timber base. The wooden formed base is made into a feature with a delicate brass trim that follows the curves and bends of the structure. The open and delicate table is contrasted against the other part of the nesting set which features a stone top and a more brutish shape. When they are put together, they balance perfectly both in form and in materials.

Still in the study, the combination of different materials continues with the design of the desk. The desk is composed of two main structures. One is a stone support structure that has a window cutout for decorative purposes while the other main part of the desk is made from Solid Prime Oak that has been stained to black. The combination of the two elements is set against a brass feature wall that warms the otherwise cold stone and dark timber of the desk.

There were additional pieces created such as mirrors in hallways as well as a mirror and vanity in the bedroom and wardrobe. These mirrors include an integrated door that hides plug points and storage. The entire home was designed with cohesion and consistency, through the selection of materials and the form of each furniture element. 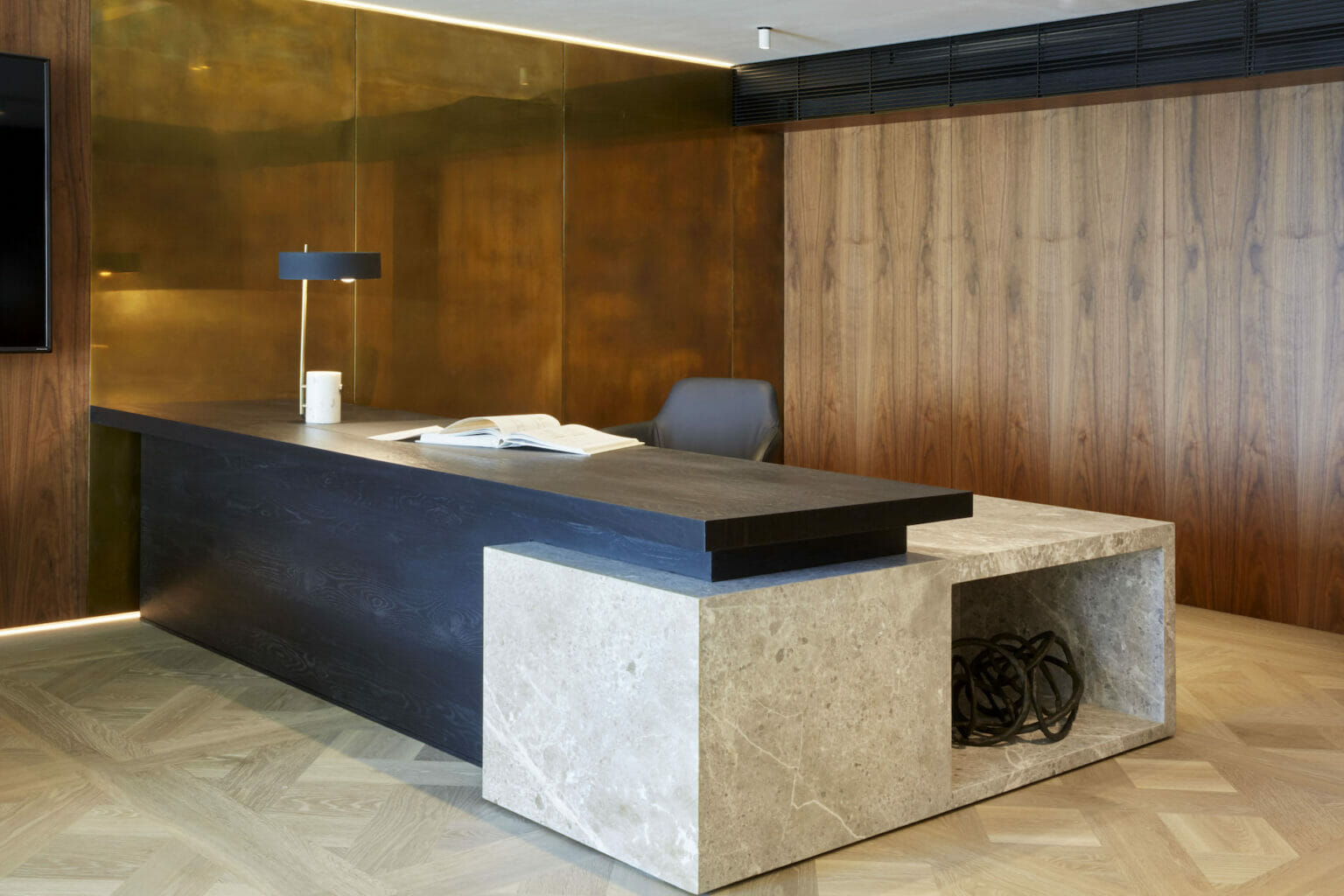 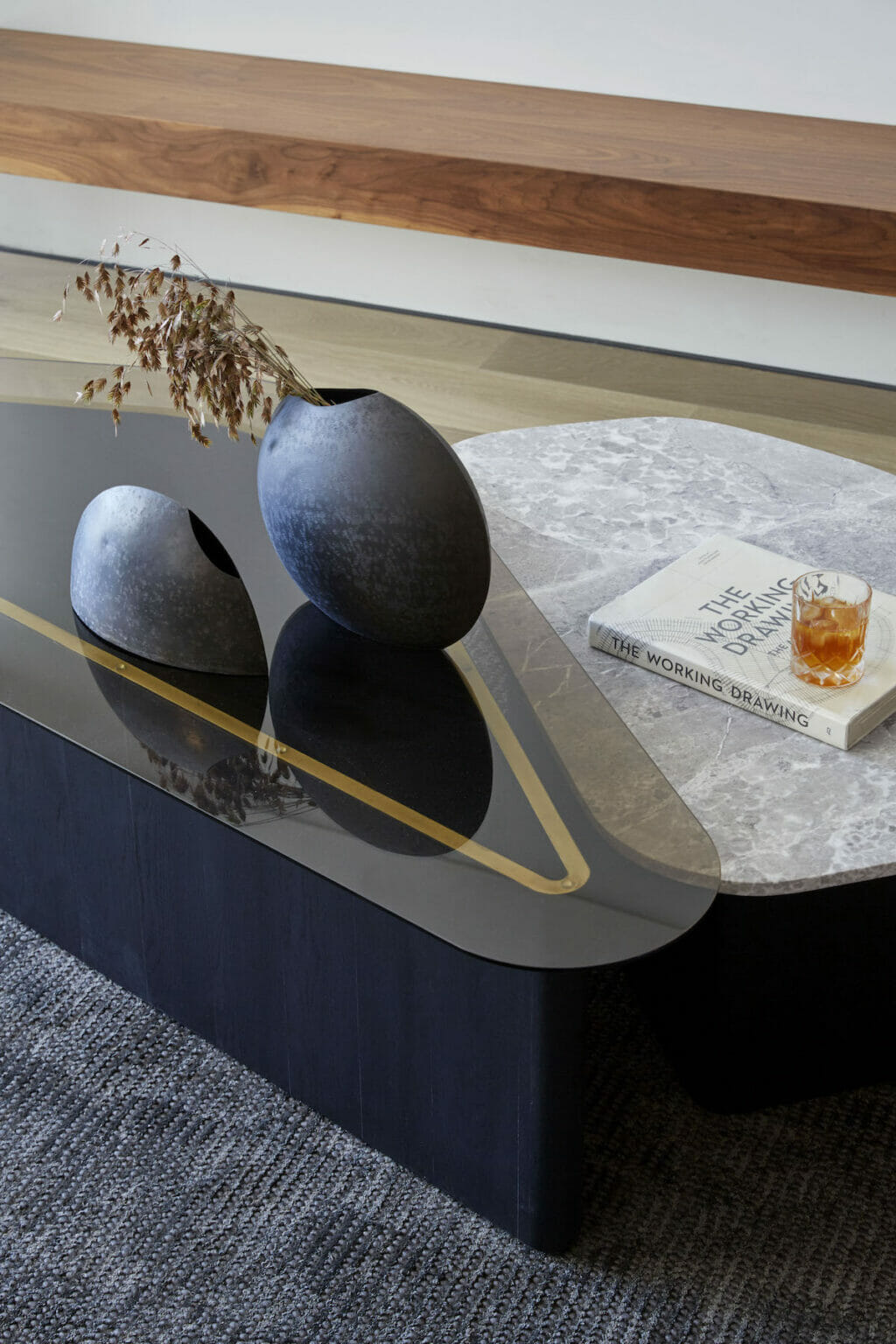 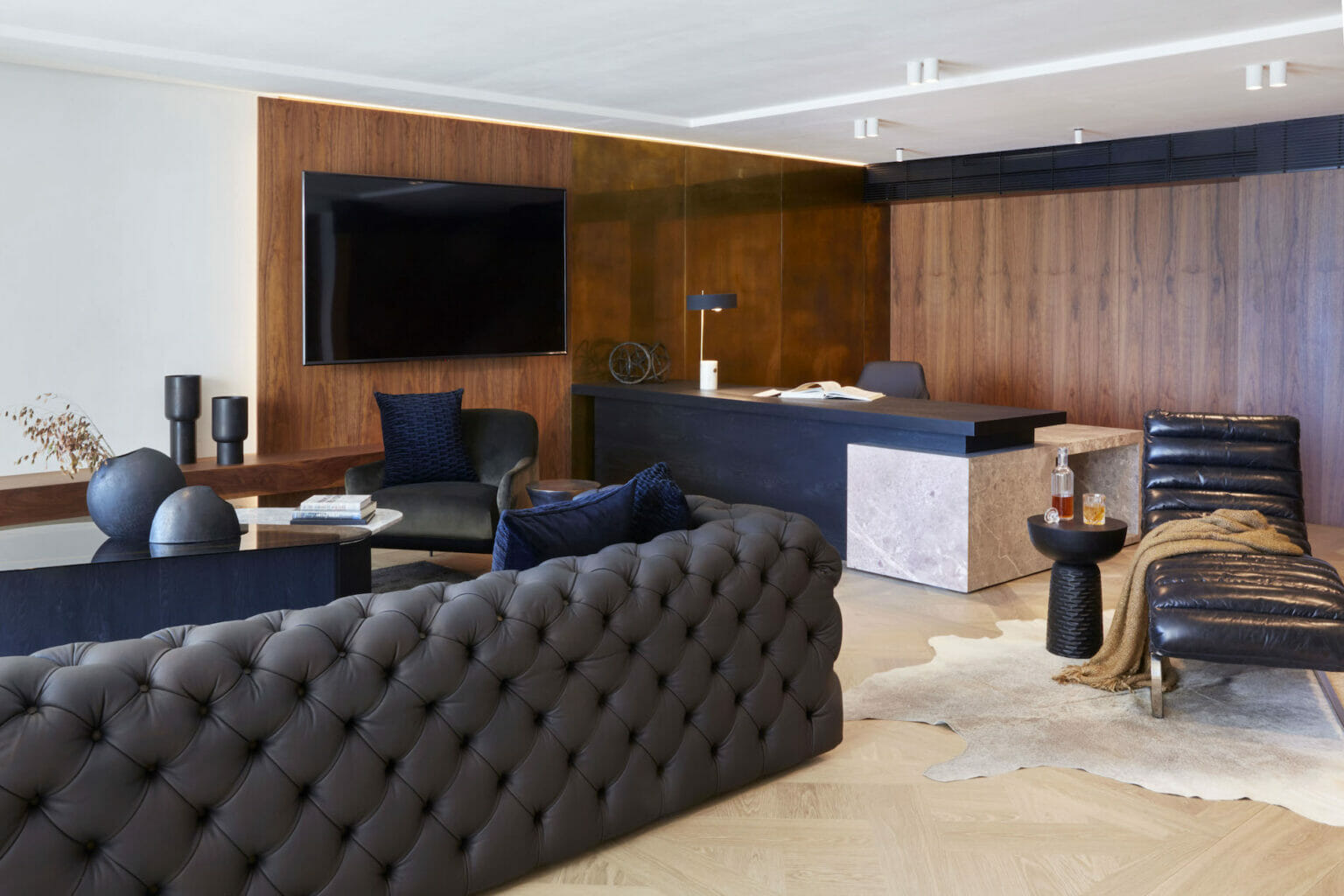 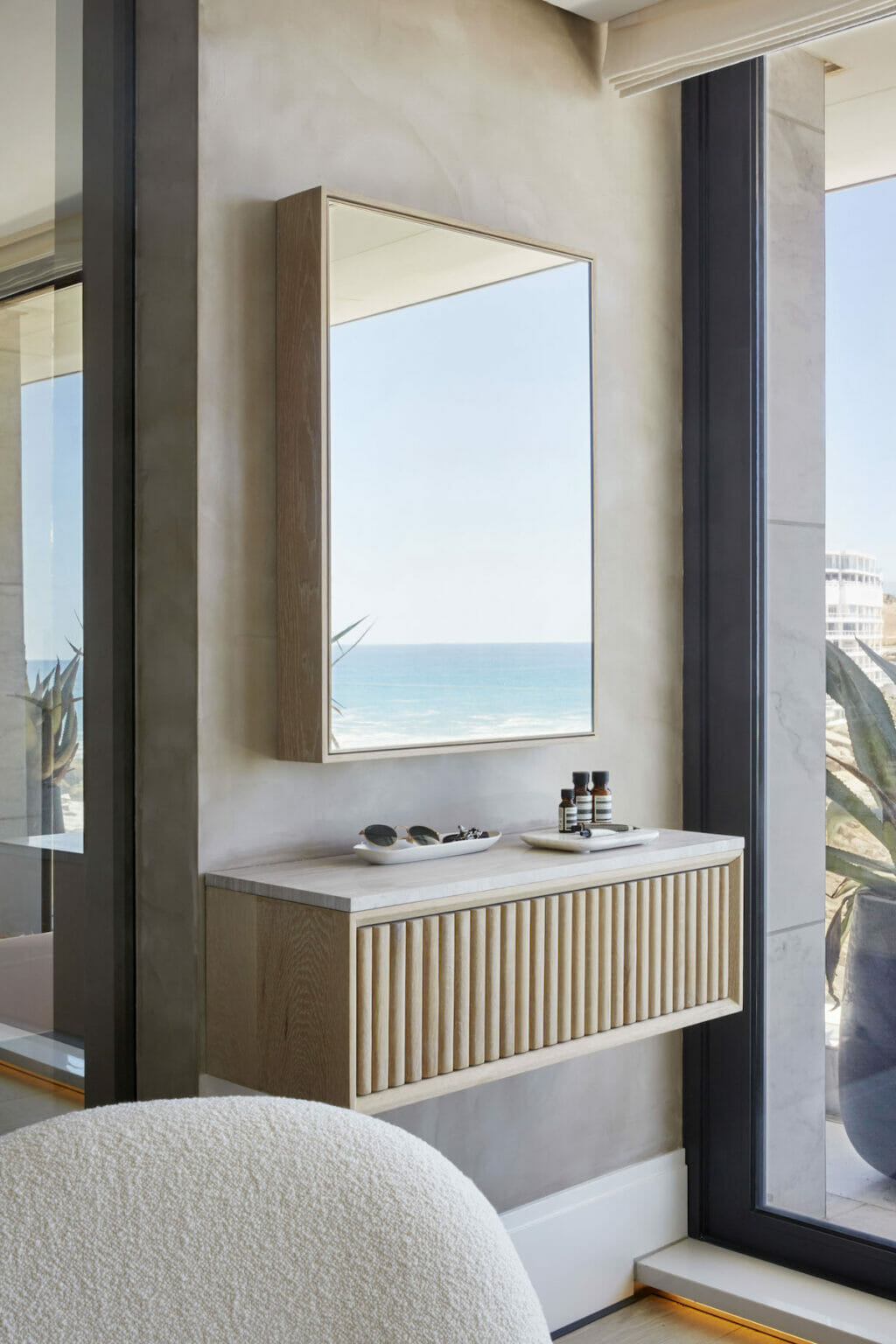 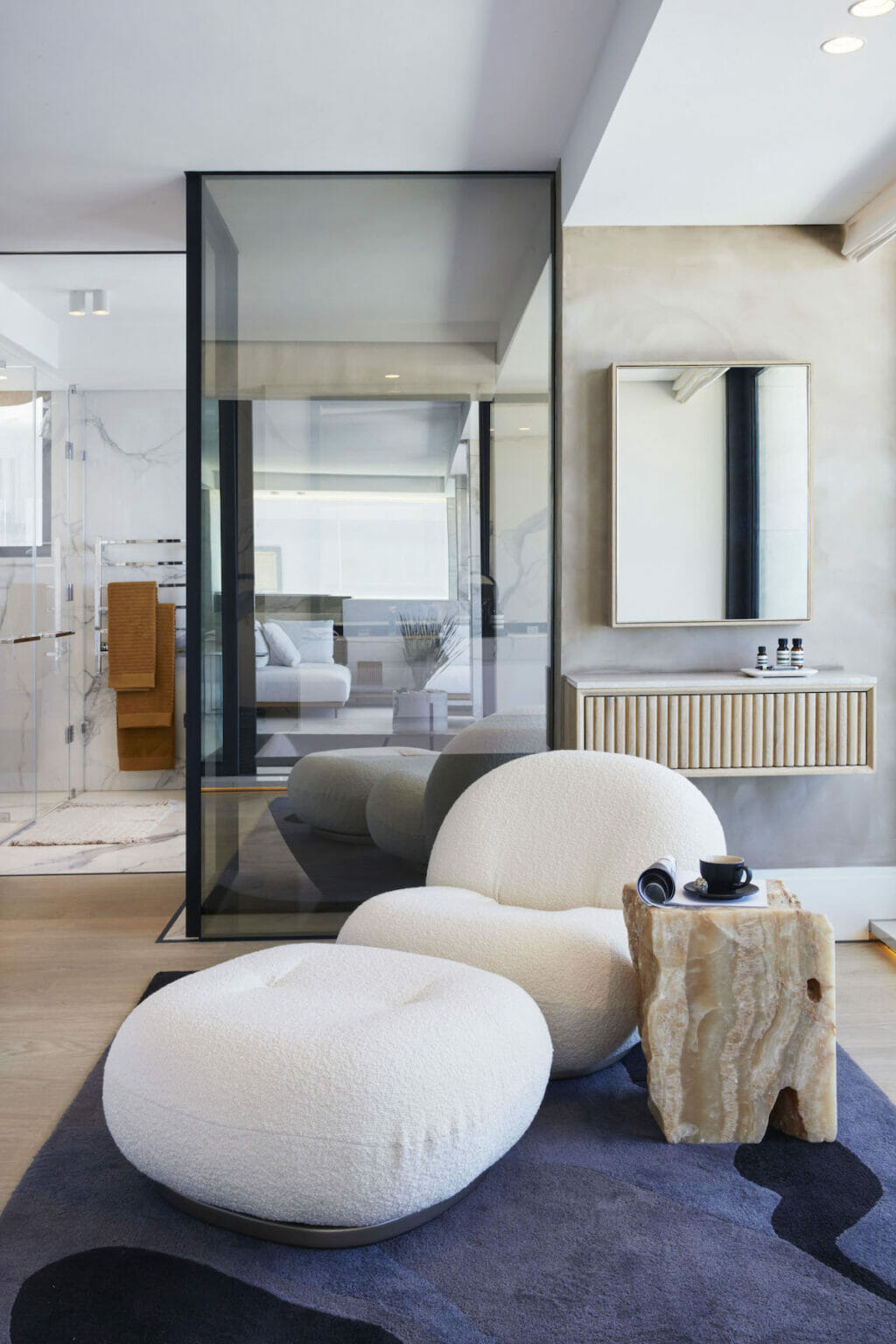 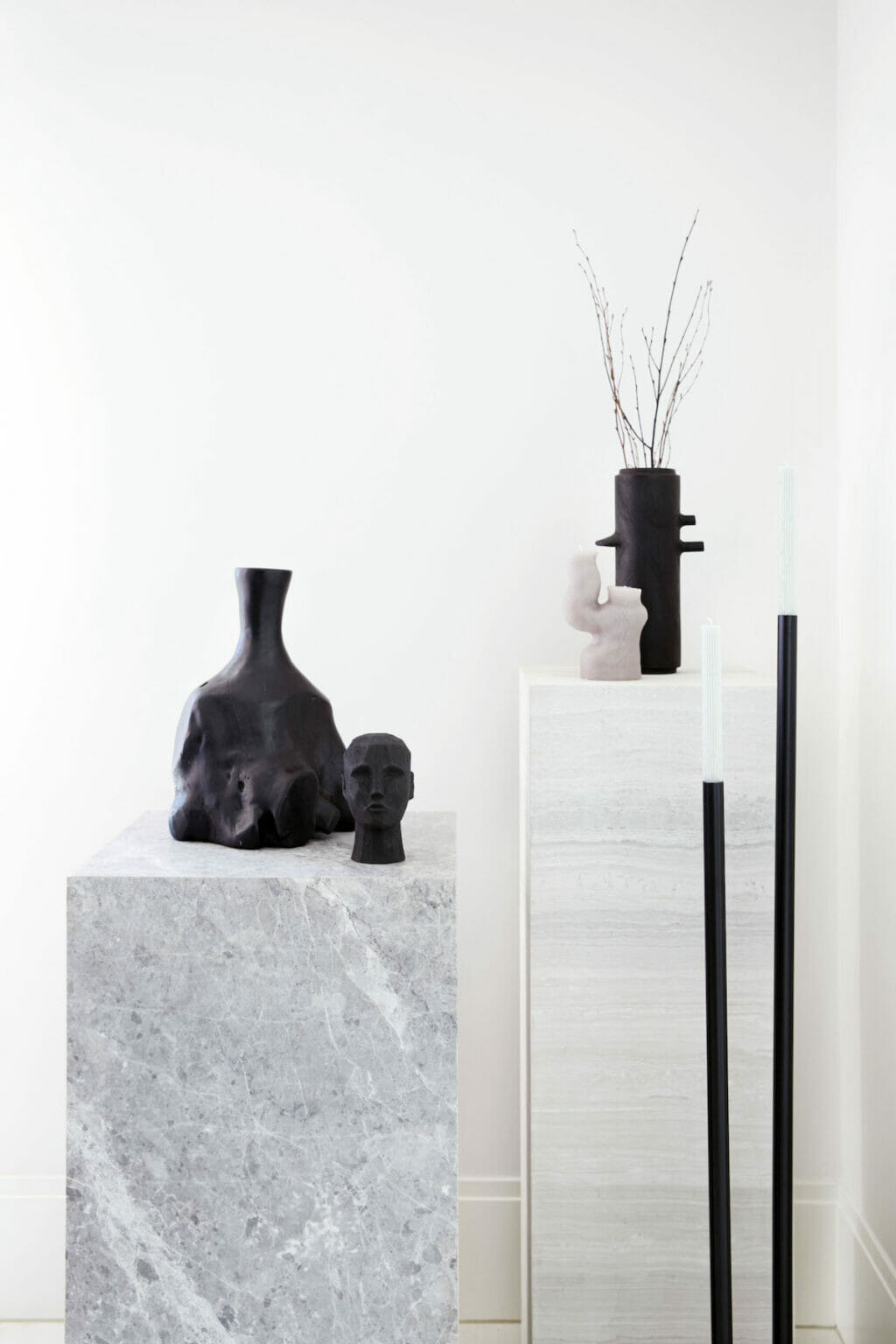 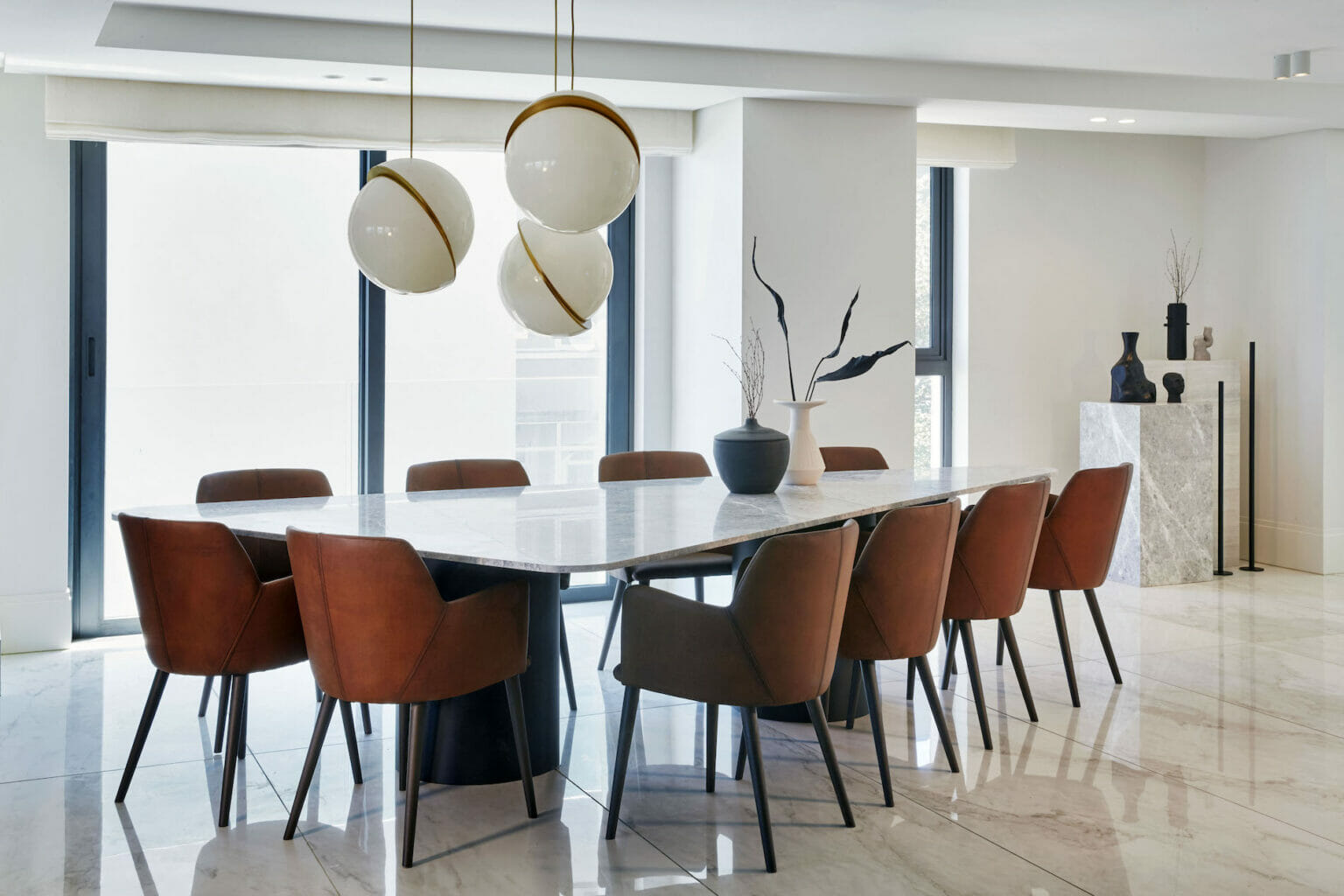 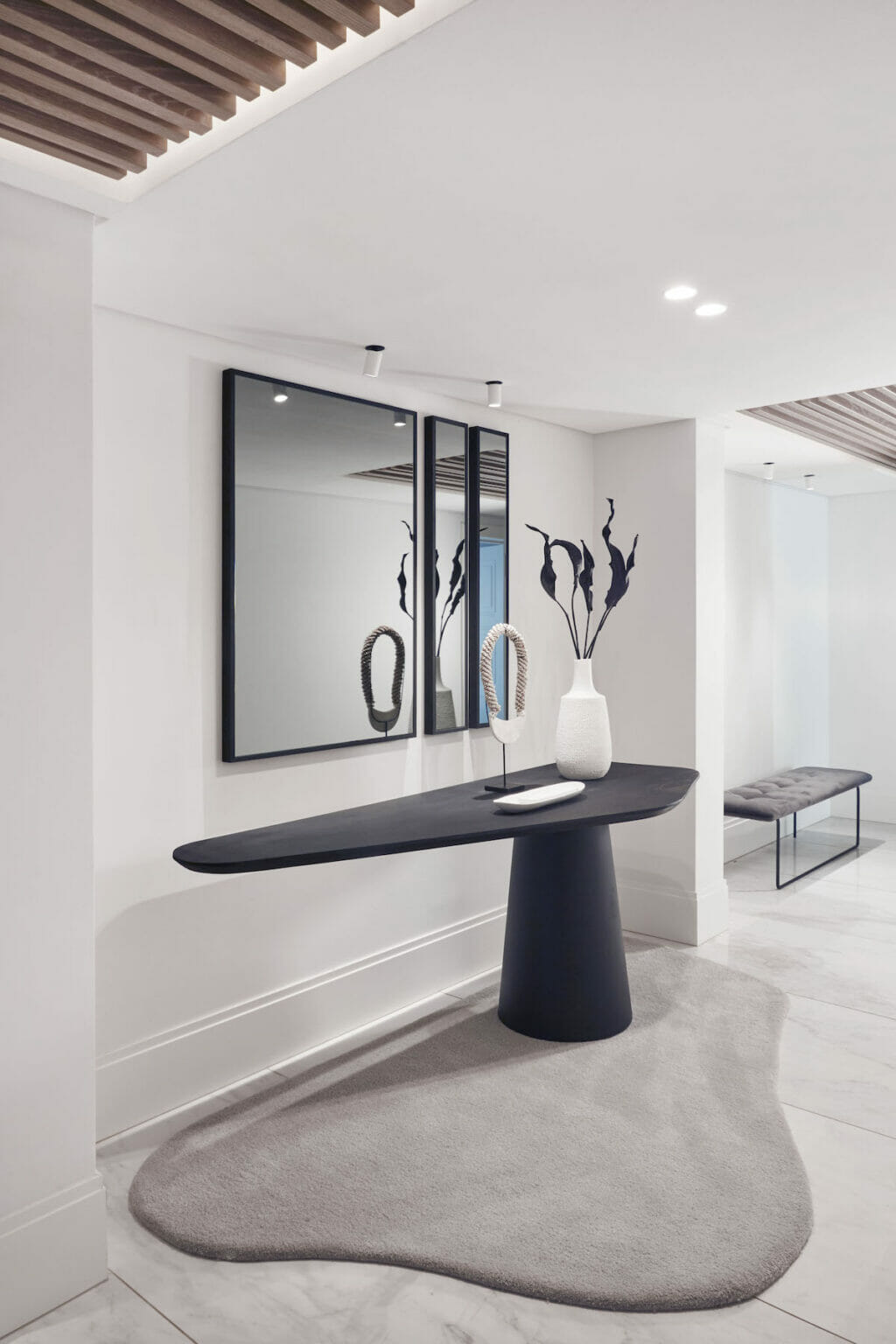 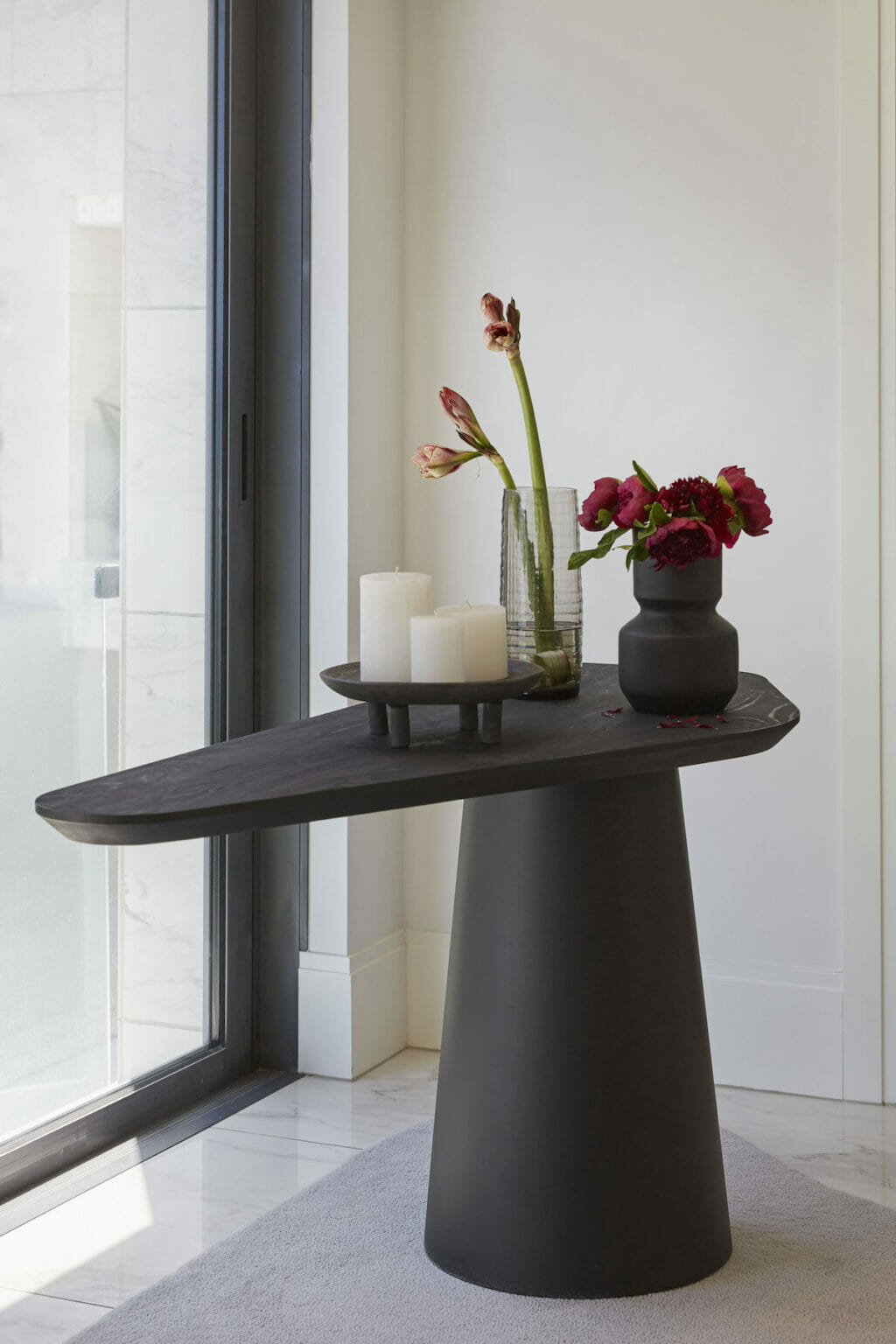 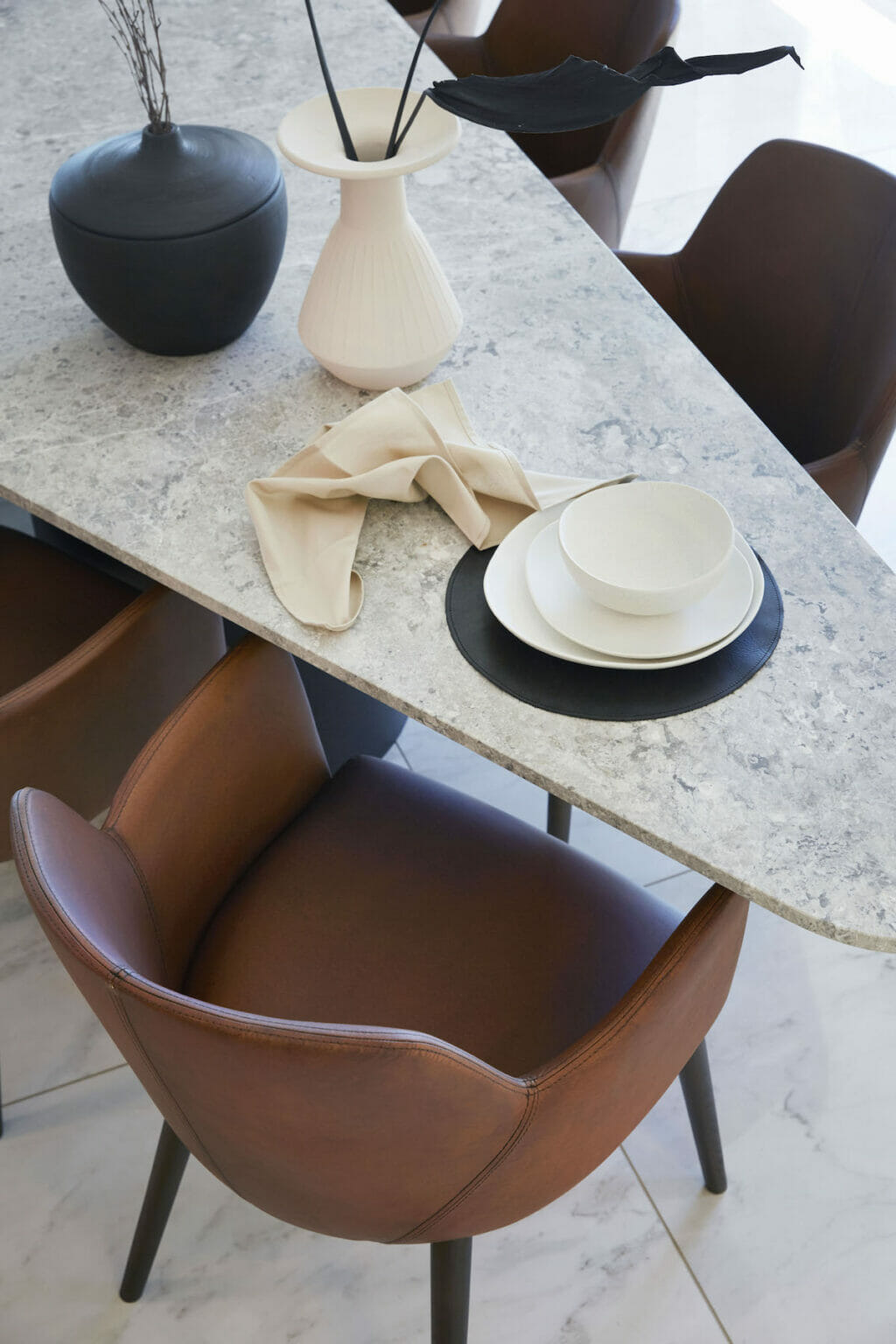 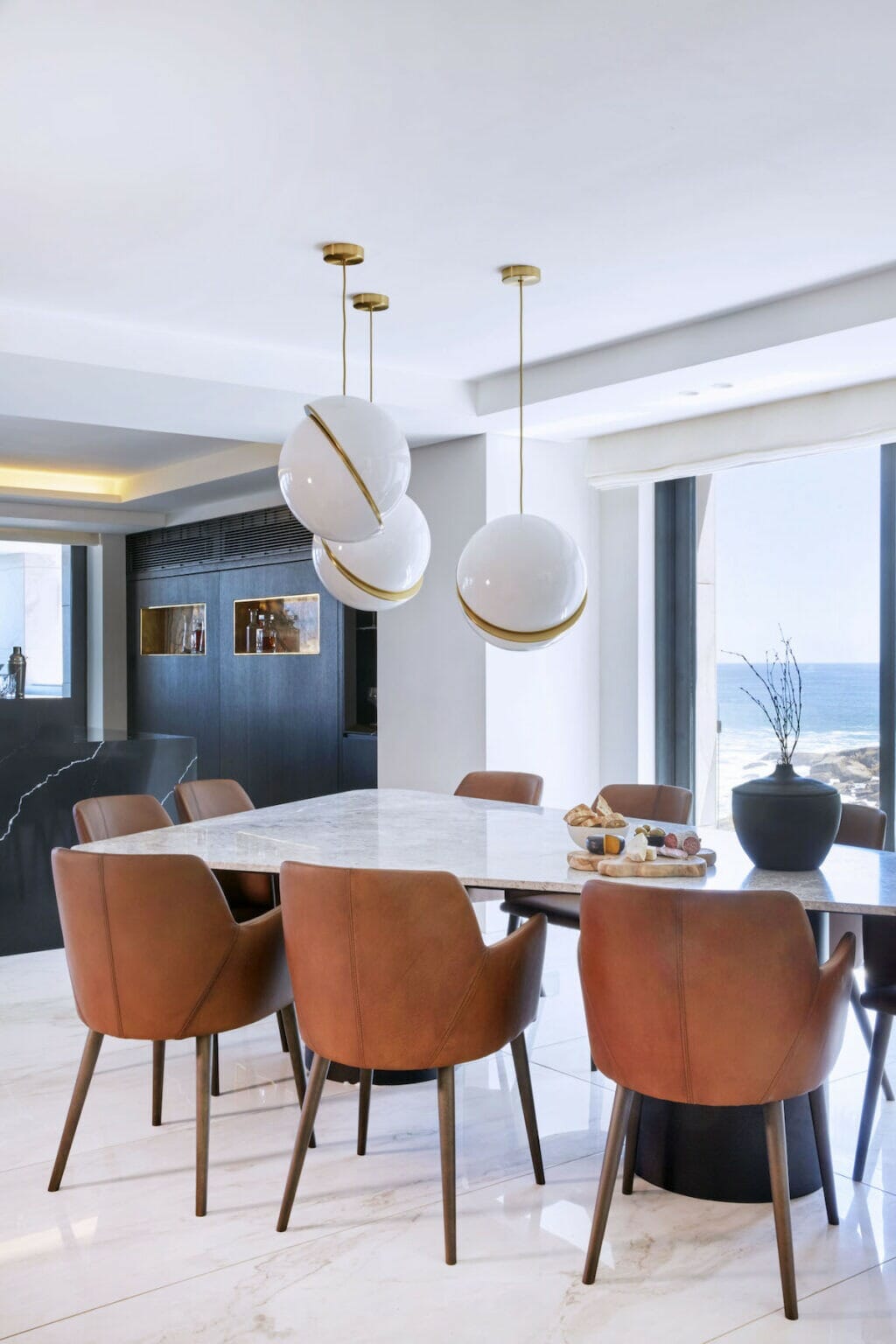 A Furniture Sensation in Bantry Bay

A Celebration of Textures on Signal Hill

This website uses cookies to improve your experience while you navigate through the website. Out of these, the cookies that are categorized as necessary are stored on your browser as they are essential for the working of basic functionalities of the website. We also use third-party cookies that help us analyze and understand how you use this website. These cookies will be stored in your browser only with your consent. You also have the option to opt-out of these cookies. But opting out of some of these cookies may affect your browsing experience.
Necessary Always Enabled
Necessary cookies are absolutely essential for the website to function properly. This category only includes cookies that ensures basic functionalities and security features of the website. These cookies do not store any personal information.
Non-necessary
Any cookies that may not be particularly necessary for the website to function and is used specifically to collect user personal data via analytics, ads, other embedded contents are termed as non-necessary cookies. It is mandatory to procure user consent prior to running these cookies on your website.
SAVE & ACCEPT
Scroll to Top